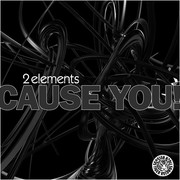 There are several reasons that you can admire the hot female duo 2elements. The first and most important is that they are great entertainers and they are fun to watch and listen behind the decks. Their gigs in Germany, Russia, Romania, Emirates, USA, Italy, Spain, Austria or Switzerland are legendary and their fans that happened to be in them comment in their social networks about 2elementsability to make them instantly dance and have the big wide smile in their faces. The second reason to admire them is their fantastic production.

Their latest release on their home base Tiger records is called Cause You and is considered as one of the records that will cause big interest in this years ADE conference in Amsterdam. Cause You combines very cleverly an amazing retro breakdown with rough agressive drop. On the breakdown will surprise the classic piano chords and the well known disco vocal sample. You may expect that after the cool feel good breakdown more housey grooves will follow but the truth is that in the EDM mix huge banging booming heavy beats are exploding to bring mayhem and drive the fans of EDM style out of their heads. Hardstyle basslines, addictive synthy melody and feel good vibes will be spread all over the place so better Ride On Time with this Massive Anthem.