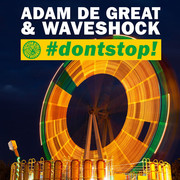 Two of the most upcoming and quickly rising high producers from Poland land on Tiger records with their next huge anthem #dontstop! The superb and very talented Adam De Great & Waveshock prove that they are not one hit wonders and deliver once again the goods that will definitely make you wanna dance and jump around like a freak without doubts. Tough drums, punchy in your face basslines and breakdown that is characterised from that synthy hook that reminds you of a well known theme from a film but after some notes changes to become something extremely larger than life.

Additional synthy hooks are added along with with classic female house diva vocals and claps. Then the hardstyle infused synths are introduced along with the MC style vocal samples that demand the crowd to "Raise Your Hands Up". The drop is dynamic, pumping and optimistic to the maximum. When you listen to it even if you feel that you have been left out without energy at all you feel obliged to jump as high as you can like being hit by electro shock. So better let all the inhibitions go and enjoy the feel good rhythm!