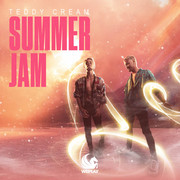 TEDDY CREAM are Brandon Mangion and Vincent Calderone, two lifelong friends who began producing together at 13, touring at 18, and dominating dance music not long after. Whatever the song, whatever the genre, their music is made to party to!

The Australian duo had long been fans of The Underdog Project's year 2000 hit 'Summer Jam', featuring it regularly in their sets. "It was one of our favourite songs around 2014 and 2015 and then it went full circle and we thought hey, this could be a cool song for us to re-do", the boys explain. "It was time for a fresh remake so we put our touch on it."
Their reimagining of the classic European summer hit – which is all about good weather, good times and good people – is big, bold and perfectly Teddy Cream.

In keeping with the motto "It's always summer somewhere" and actually just in time for the Australian summer, none other than Mike Candys, DAZZ and Basti M & Bolinger deliver fresh remixes of 'Summer Jam'! With three completely different approaches from Electro House to Future House and even Nu Disco / Disco vibes, this package includes something to suit every dance floor.