ALEX SCHULZ FEAT. KID ALINA - My Heart Is Your Heart 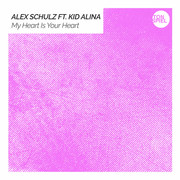 ALEX SCHULZ FEAT. KID ALINA "My Heart Is Your Heart"

ALEX SCHULZ is back on TONSPIEL!
The Stuttgart-based producer and DJ has confidently enlarged his fanbase over the years: with high-quality releases on labels such as Spinnin' Records, Warner Music, disco:wax, Armada Music or LoudKult he has reached over 86 million streams and 144k followers only on Spotify! He has also been really successful in Apple Music's top playlist and charts like "Relaxed / Remixed", "Top 100", "Dance" or "House" in several countries all around the globe.

For "My Heart Is Your Heart" ALEX SCHULZ teamed up with 10-year old KID ALINA! The super young talent, who actually also lives nearby Stuttgart, is a true wunderkind. Besides her undeniable talent as a singer, she is also playing the flute and learning the drums.

The result of ALEX SCHULZ's and KID ALINA's collaboration is absolutely remarkable and zeitgeisty, with the potential to be a chart-topping record! The catchy hook combined with that thrilling bassline will cast a spell over everyone and there is no doubt you'll hear it on your favourite radio station soon!

"My Heart Is Your Heart" is set to be released on February 21st, the Club Edit will follow March 6th.