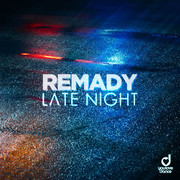 REMADY is ready with his next clue. The idea behind his latest coup "LATE NIGHT" is a song for every mood. Not a typical love song and not a typical club anthem. It's a song that accompanies you all day long, no matter if you're driving to work, going to the gym, hanging out with friends, getting in the mood for the next party or just chilling out on the sofa by yourself and enjoying life. The music video for "LATE NIGHT" can be found on REMADY's Vevo channel, which has just won the Silver Creator Award for over 100,000 subscribers.

Over the past ten years REMADY has established himself as a successful artist not only in the Swiss dance scene, but also internationally with various platinum and gold awards. Behind the pseudonym is the Zurich-based music producer and DJ Marc Würgler.
With numerous releases such as the debut "NoSuperstar" (48 weeks in the Swiss single charts), "Give Me A Sign", "The Way We Are", the new edition of "Somebody Dance With Me" together with DJ Bobo, "Do It On My Own" with Craig David and "Single Ladies" (No.1 in the Swiss single charts) he celebrated enormous success. He has won several awards, including the Swiss Music Awards and also the Swiss Night Life Awards.