VOYAGER2 - Mountain And Peace / I Said The Moon 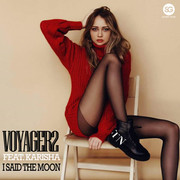 VOYAGER2 "Mountain And Peace / I Said The Moon"

The song was written during lockdown and it is inspired by the COVID-19 situation and the general claustrophobic feeling that it brought by forcing everyone to stay inside for a long time.  It all started with a track that Rob sent. I didn't have time to open it before we had to self-isolate, so maybe staying at home, looking for things to do, wasn't that bad after all. Being stuck at home in the city, constantly watching news about how the world is on fire, made me think of how good it would be to escape in a place far from the madness and reconnect with nature. That is how the lyrics: “I’m running far from the city lights”, “ I dream of mountains and peace” came to my mind.  While working on the verses, I ended up extending the theme of the song to the subject of life in big cities in general. As exciting and fulfilling as it is, the busy urban life can sometimes make you feel small, unnoticed or tired. That’s exactly what the verses are about. Working on this track from home was pretty exciting: it kept me busy and it felt a bit like therapy. The thrill of the rush is still stronger than the desire to leave, so we’re happy that instead of actually disappearing in the mountains we ended up writing a song that people can dance to.

The story of the song is pretty simple. Wrote it in Spain, the weather and the vibe felt amazing after coming from London where it was raining. Felt like I wanted to write something motivational and uplifting after a long time of feeling a bit down in London. So yeah a change of location helped. Wanted to leave all the worries behind and disappear for a while. Was trying to touch the whole love and career path dilemma, hence "I can't play what I can't win right now". So the song is basically about getting on the path of finding yourself and focusing only on the future and not the past. Feel like we are all some strangers drifting in this world trying to find the light.