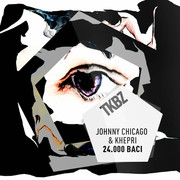 KHEPRI was born in Darmstadt but raised in Welschbillig, a town next to Germany’s oldest city Trier. This young gentlemen is a songwriter, vocalist, model, entertainer and rebel, so to say a truehearted artist. He’s going by the legal name Jonathan Jaekel.
Thanks to his mother he was introduced to the arts of graphics and music, given a pen, a guitar and excellent language. Being a member of Pvrpleroom, he had the right circle to get more into rap, beatmaking and recording. He met JOHNNY CHICAGO, a producer from Luxembourg and which led him to write and produce for other artists and his solo project, followed by singles like: "Fly Away", "Girl You Get Me High", "C’est Ma Vie", "Wah Wah and Burn" with the artists JOHNNY CHICAGO, Oke, Bahar Kizil and Leif Bent and his latest solo singles, "Drive Through My Mind", "Wind It and Picasso". He further improved his writing skills and was surrounded by creative, like-minded people, which led to winning the German Songwriting Award 2017 in Berlin, Germany with his former production crew Noble Tonez Music.
He finally set his foot in the Music Industry after signing with Grand H Music, which gave him the opportunity to travel around the world and connect overseas. KHEPRI derived from the Egyptian language „come into being“ or „create“ is an artist, model and brand incorporating music, art and fashion. The German songwriter with Cameroonian roots personifies the law of attention. He developed a significant Character with a distinctive voice and is currently working on his debut EP.

JOHNNY CHICAGO was born and raised in the Grand Duchy of Luxembourg, a small country in the heart of Europe. It is the sometimes dramatic yet always cool alter ego of producer, composer, songwriter and vocalist Jonathan Reichling. Due to a music teacher he discovers the art of composing and starts to write and produce own songs as a teenager. Luxembourg’s legendary film The Troublemakers and it’s main character provided the artist’s name early on: „JOHNNY CHICAGO was always my nickname when I grew up playing football and it is a perfect fit for me as an artist.“ He started out creating many productions for other artists in various genres on the search for his musical identity. The result of his journey has been the classic JOHNNY CHICAGO sound of today - dance and pop songs with urban influences. It is always about fat 808’s, hard beats and catchy hooks and a natural curiosity for other styles brought by collaborators. This has lead him to win the German Songwriting Award 2017 in Berlin, Germany with his production crew Noble Tonez. Since then he has had numerous releases on his own like the anthem Vision featuring rap artist KHEPRI and vocals by himself. More recently he released singles "Fly Away", "Girl You Get Me High" and "Wah Wah" with frequent collaborators KHEPRI and Oké.
As a producer and songwriter his journey has taken him all over the world to work with artists between Hamburg, Berlin and Toronto. Whether as a producer or as an artist on his own right, the sound of JOHNNY CHICAGO has become instantly recognizable. Still he is always looking for incredible artists to create something new, living in the moment and making new discoveries. Yet his natural showmanship and cultural roots make sure that the narrative of Sinatra with the 808 is always entertaining.