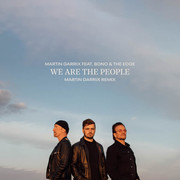 MARTIN GARRIX FEAT. BONO THE EDGE "We Are The People (Martin Garrix Remix)"

After releasing the original a month ago, MARTIN GARRIX has now reworked his official UEFA EURO 2020 song "We Are The People" featuring BONO and THE EDGE into a high-energy remix.

LISTEN HERE: The powerful remix emphasizes the festive and uniting spirit of the track while providing the perfect party anthem for the upcoming summer days. Meanwhile, BONO's vocals and THE EDGE’s guitar riffs stay right in place, maintaining the original blend of the signature sounds of each artist.

For the accompanying music video, fans were asked to submit footage of special moments; adventures they will never forget, family moments they will cherish forever, or the smile of their loved one. The result is a collection of raw and real moments that will send a shiver down your spine.

WATCH HERE: With the tournament kicking off last week on the 11th of June, MARTIN GARRIX, BONO and THE EDGE also took over the center stage at the UEFA EURO 2020 opening ceremony with a virtual performance of "We Are The People". Next to the official track and the remix, Garrix has also produced the official walkout and broadcast music for the tournament. The final will take place at Wembley Stadium, London on 11 July 2021.

In the meantime, MARTIN GARRIX can’t wait to start playing festivals again where this remix can surely be expected in his set.