HITFIELD & SCOTT STORCH - On My Mind (You're The One) 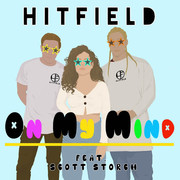 HITFIELD & SCOTT STORCH "On My Mind (You're The One)"

"On My Mind" is out now... a great Song in Cooperation with SCOTT STORCH !!

Founded in 2018, HITFIELD set out to free people from their everyday lives and fill them with new strength. And if anyone can do that, then it is these three live DJs who, with their vibrant energy and unbridled zest for life, cast a spell over anyone who is lucky enough to meet them. In the songs that SoundDesigner L2L and the two voices of the band, Carolina and TheOdeRich, compose and produce , they emulate their great role models, including the Beatles, Rihanna, David Guetta and Diplo. The more danceable, the better, and the more unforgettable, the better. HITFIELD uses almost every genre to do this and they fine-tune their sound, composition and lyrics until everything is perfectly right.

The result: song seeds in the space between Pop, HipHop and EDM, which please, carry you away, and are fun - and with all their diversity, they consistently play their very own sound and the unmistakable spirit of HitField. HITFIELD are thus on the road to success - and today, after their great start (after spectacular high school proms, a whole series of historical discotheque appearances and their legendary house parties), they are heading for promotion to the next class.