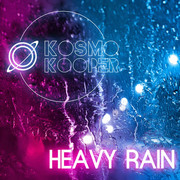 Imagine blasting your favorite Songs while accelerating your DeLorean to 88 mph in the neon lights of the streets. This is Galaxy Pop.

Born and raised in southwest Germany, KOSMO KOOPER has started playing the Piano at the age of thirteen. His teacher gave him the legendary Album Toto IV with the words: you need to get as good as these guys. Since then he has made a career as a studio and live musician, writer and producer for numerous acts. In 2021 KOSMO KOOPER is making his debut as a solo artist. He combines Retro, Synthwave and New Wave with modern elements. His sound is a callback to the big 80s records you love. Huge drums. Phat bass lines. Atmospheric synths. Paired with an outstanding voice and heartfelt lyrics. Nostalgia at its best.

"Heavy Rain" is the follow-up to his critically acclaimed Single Oh Brother, which gained plays in over 70 countries within a few weeks after release. „Like most people I start looking for shelter when the rain comes. But sometimes you have to put yourself right in the center of the storm. And while the water runs down your face and body, it takes off all the dirt from the past until your true self begins to show, literally washing your pain away. To me that’s the heart of the song.“ Musically "Heavy Rain" starts off with a vintage drum machine groove and builds up to a big chorus with almost gospel like choirs and huge acoustic drums in reminiscence of classic acts like Phil Collins. „I am very proud to join with Retro Reverb Records in Italy. This journey is so much fun. They’re incredibly talented people. We all have a vision and everyone is working extremely hard to make it come to life.“