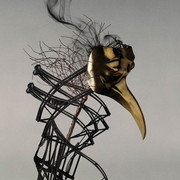 Still buzzing off of his sold out ‘The Masquerade’ events at AFAS LIVE at ADE, Zamna, Tulum and SLS Hotel during Miami Music Week, along with what Miami New Times called a “massive” set at Ultra Music Festival in Miami, Claptone has garnered residencies at two of summer’s most glamorous getaways: Encore Beach Club & XS at Wynn Las Vegas and Pacha Ibiza, inviting all who attend into his magical world ignited in illusion.

On the music side, the masked DJ/producer Claptone is back with a new single including another dazzling remix package, “Beautiful” ft. lau.ra, available on all streaming platforms today via Different Recordings, laced with a wide variety of house remixes from James Hype, Monkey Safari, Murmur Tooth & Lars Moston.

lau.ra, aka Laura Bettinson, is an immensely talented singer, songwriter, artist, DJ (and a recent mother), who has garnered global support from Mixmag to BBC Radio One. lau.ra was recently recognised in SheSaidCo’s Alt Power List 100, the prestigious list that challenges the industry’s outdated systemic framework by recognizing women and their achievements in the music industry.

“Beautiful” is the ninth single from Claptone’s globally renowned third album, 'Closer', co-produced by Stuart Price (Dua Lipa, The Killers, Madonna) that was released in November 2021. Claptone reveals, “Beautiful is an ode to selfless, giving, warm-hearted people. Those among us that are the essence that holds a relationship, a society well in the end all mankind together.”

Claptone continues to soar to new heights, as his highly in demand production talents have caught the attention of artists as diverse as Florence and The Machine, Depeche Mode, Elton John, New Order, Pet Shop Boys, Dua Lipa who have requested his remix skills for some of their biggest singles, while a prestigious array of some of the most unexpected collaborations on his current album include Seal and Barry Manilow.

Claptone has been unstoppable this year, already releasing two remixes to what Euphoria called his “sensational” single, “Queen of Ice”, from Pet Shop Boys and Nora En Pure, the latter which was the #3 most saved track on Spotify. He also unveiled a massive remix package for his collaboration with soul-pop icon Mayer Hawthorne, “Feel This Way”, featuring a club-infused pop rendition by Andhim and a 90’s rave fueled remix from Gettoblaster.

His enigmatic presence, with his Venetian guise, black attire, golden-beaked mask, and white gloved hands complete the mystique that continues to draw sophisticated crowds from all over the world. Claptone is currently on tour in support of his recent album ‘Closer’, with dates including EDC Las Vegas, Miami’s STORY Nightclub, and many more!