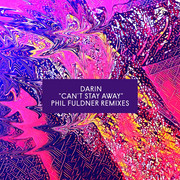 Phil Fuldner enhances DARIN's latest masterpiece with his incomparable "Fuldner factor", letting the vocals fly over a crispy hand-played bassline and a smooth House groove. The result is the perfect symbiosis between DARIN's superb pop gem and Phil's unmistakable call to dance.

DJ legend, hit producer and 360 degree creative Phil Fuldner is internationally admired for his unique blend of House, Tech and one-step-beyond Disco Sounds which made the Ibiza Dance Award Winner one of the most popular club & festival DJs. As a producer and songwriter he has been awarded with several gold and platinum records and his hits „The Final - Captain Future Theme“ or „Miami Pop“ are classics in the Hall of Fame of electronic dance music.

In summer 2019 his hit single “Take Me” was one of the most shazamed titles in the UK, on rotation on BBC Radio 1 and has been streamed more than 10 million times all-over to date. On the live side of things, Phil Fuldner’s appearances at party brand du jour Glitterbox cemented his standing on the international House Music scene.

His latest remix of „No Sleep“ for Crooked Colours peaked on position 9 on Beatport and his collaboration „Hoping“ with jazz-electronica legend Louie Austen.